Adonis was one of the lovers of Aphrodite, the Goddess of Beauty and Love, and said to be so handsome that she followed him wherever he went. Her devotion to him, however, ended with his tragic death in the hands of a jealous Ares, the God of War.

Adonis was a figure shrouded in mystery and legends. Some accounts state that he himself was a God of Desire and Beauty, while others claim he was a God of Vegetation and Rebirth.

One of the most popular myths, however, explain him being actually the product of an incestuous union: the Princess Smyrna (or Myrrha) of Thrace was too arrogant to pray proper homage to Aphrodite, who punished her by inspiring her to sexually lust for her own father, King Cinyras. With the help of her nanny, who disguised her as a slave girl, Smyrna gratified her lust for seven days and seven nights. When Theias discovered the fraud, he tried to kill his daughter. Smyrna asked the Gods to help her, and thus they transformed her to a myrrh tree, through which Adonis was born when he was fully developed. 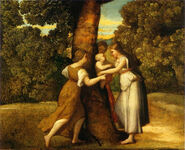 The Birth of Adonis

Aphrodite Mourning the Death of Adonis

Aphrodite & Adonis
Add a photo to this gallery
Retrieved from "https://greekmythology.wikia.org/wiki/Adonis?oldid=79194"
Community content is available under CC-BY-SA unless otherwise noted.