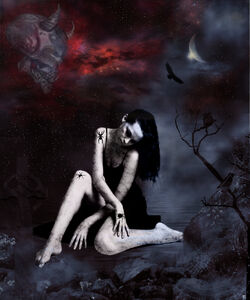 Akhlys (Αχλυς) was, according to some ancient cosmogonies, the eternal Night (perhaps the Mist of Death, which clouded the eyes of the dying), and the first created being which existed even before Chaos.

According to Hesiod, she was the personification of misery and sadness, and as such she was represented on the shield of Herakles: pale, emaciated, and weeping, with chattering teeth, swollen knees, long nails on her fingers, bloody cheeks, and her shoulders thickly covered with dust. If she was a daughter of Nyx (Night) then she may have been numbered amongst the Keres.

▪Her counterpart is Hedone.

▪Her siblings are Momus, Thanathos, Eris, Geras, Oizys, Hypnos, the Oneiroi, Hemera, Moros, Philotes, the Keres, the Fates, Nemesis, Apate, Dolos, Charon, Eleos ,the Hesperides and Aether. ▪She is one of the many children of Nyx.

Retrieved from "https://greekmythology.wikia.org/wiki/Akhlys?oldid=76801"
Community content is available under CC-BY-SA unless otherwise noted.