Antaios (Ανταιος) was a giant from Libya, son of Poseidon and Gaia. To honor his father, Antaios lured every man who crossed his path into wrestling matches in order to murder them and use their skulls to decorate a temple to Poseidon. Due to Gaia being his mother, Antaeus received an enchantment that made him invincible, so long as he remained in physical contact with the ground.

Soon enough, Antaios met his match when he stumbled across his cousin Herakles, who then was on the way to fulfill his eleventh task. Herakles accepted the giant's challenge and the two engaged in a fierce battle. Soon enough, the demigod hero realized his foe's weakness and managed to win by lifting Anteus into the air by crushing him to death. 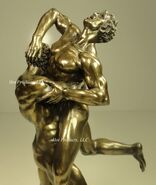 Add a photo to this gallery
Retrieved from "https://greekmythology.wikia.org/wiki/Antaios?oldid=76883"
Community content is available under CC-BY-SA unless otherwise noted.