Ariadne (Gr: Αριαδνη) was the immortal wife of the wine-god Dionysus. She was the daughter of Minos, King of Crete, and his wife Pasiphae, daughter of Helios and Perse, also spelled as Perseis or Persa, of the Oceanids.

Ariadne was born to King Minos and Pasiphae.

Ariadne saw Theseus, and fell in love with him. He volunteered to slay the Minotaur, which broke her heart to think he would die. She spoke with Daedalus, and he gave her some yarn to guide him out. She thanked him, and gave it to Theseus. Theseus ended up slaying the Minotaur, and came out of the Labyrinth thanks to the ball of yarn. Theseus took Ariadne with him back to Athens, before Minos could kill them. Theseus, however, grew bored of her, and brought her to the island of Naxos. They fell asleep that night, and Theseus left early in the morning, before she ever awoke, thus abandoning her.

Days later, Ariadne was on the verge of death, and had been crying the whole time. She gave up everything for Theseus, who left her to die. Dionysos saw her when he went to Naxos, which was his favorite island, and not only pitied her but also loved her. He cursed Theseus to forget to change his sails from black to white, indicating his victory, and then married Ariadne. 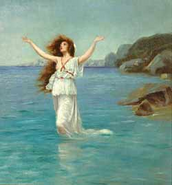 A Muse, Ganymede, Ariadne, Dionysus and A Satyr 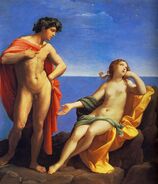