Asteria (Greek: Ἀστερία) is the Titaness goddess of oracles, prophetic dreams, astrology and necromanc. She was the daughter of Coeus and Phoibe, and the sister of Leto. Asteria flung herself into the Aegean Sea in the form of a quail in order to escape the advances of Zeus. She became the "quail island" of Ortygia. Later, the island Asteria was identified with Delos, which was the only piece of earth to give refuge to the fugitive Leto when, pregnant with Zeus's children, she was pursued by vengeful Hera.

She was married to the Titan Perses and had a daughter wth him named Hekate.

Of the daughters of Coeus, Asteria in the likeness of a quail flung herself into the sea in order to escape the amorous advances of Zeus, and a city was formerly called after her Asteria, but afterwards it was named Delos. But Latona for her intrigue with Zeus was hunted by Hera over the whole earth, till she came to Delos and brought forth first Artemis, by the help of whose midwifery she afterwards gave birth to Apollo.[1]
- Apollodorus, Library, Book 1 [1.4.1] 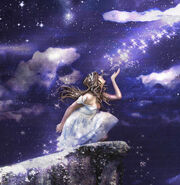 Asteria
Add a photo to this gallery

Retrieved from "https://greekmythology.wikia.org/wiki/Asteria?oldid=79158"
Community content is available under CC-BY-SA unless otherwise noted.