Blemmyes meaning "Gazing from Middle" were a tribe of headless men whose faces were set upon their chests. The earliest recordings about the Blemmyes are by Herodotus, the Greek historian C5th B.C.) They were said to dwell in either Africa or India.

"For the eastern region of Libya [i.e. North Africa], which the nomads inhabit, is low-lying and sandy as far as the Triton river; but the land west of this, where the farmers live, is exceedingly mountainous and wooded and full of wild beasts. In that country are the huge snakes and the lions, and the elephants and bears and asps, the horned asses, the Dog-Headed (Kynokephaloi) and the Headless (Akephaloi) men that have their eyes in their chests, as the Libyans say, and the wild men and women, besides many other creatures not fabulous."
- Herodotus, Histories 4. 191. 3 (trans. Godley) (Greek historian C5th B.C.)

"Ctesias [Greek historian C4th B.C.] writes that . . . westward from these [the Troglodytoi of the Red Sea coast of Africa] there are some people without necks, having eyes in their shoulders."
- Plinthy the Elder, Natural History 7. 23 (trans. Rackham) (Roman encyclopedia C1st A.D.). 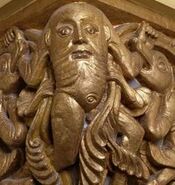 Blemmyes1.jpg
Add a photo to this gallery
Retrieved from "https://greekmythology.wikia.org/wiki/Blemmyes?oldid=74424"
Community content is available under CC-BY-SA unless otherwise noted.