The Nemean Lion known as Leon Nemeios (Λεον Νεμειος), was the son of the monster Ekhidna, it dwelled in Nemea, north of Argus. The lion was said to be bigger than Heracles, could not be harmed by any weapon. He used to emerge from two openings in his cave and destroy anything and anyone who stood in his way, and terrorized the nearby valleys. As a first task, Aristeaus told Herakles to bring him the skin of the Nemean Lion.

Herakles climbed the mountain, passed the bushes and at twilight he found the lion. Herakles took his bow and shot the lion. Since no weapons could harm it, the arrow fell to the ground as the lion did not even notice it. Heracles shot an arrow to the monster's chest, but of no avail. But that last arrow fell between the Lion's feet and he noticed Herakles, and jumped toward him. The demigod tried to hit its head with a olive wood branch, but it only misted the Lion's eyes and it retreated back to its lair.

Herakles used his enemy's blindness, and blocked the rear entrance of the cave, and stormed through the front, there he found the lion. The hero jumped on the beast's back, and since he could not harm it with weapons, he suffocated it to death. Using the dead Lion's own claws, he opened its body and made a mantal from the skin. He wore it ever since.

Returning with the pelt to the capital city, his uncle was so afraid of Herakles' mighty power he ordered him to never enter the capital with the evidence of his labors, and gave his nephew tasks using a messenger. 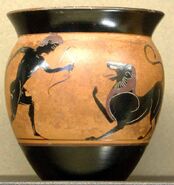 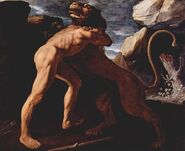