Chaos shown by a white spot in black

The Nothingness from Which All Else Sprang

Aer
Chaos (also spelled Khaos) was the first of the Protogenoi (primeval gods) and precedes the Universe. His name means ''the gap''. He was followed in quick succession by Gaia (Earth), Tartarus (the Underworld) and Eros (Love the life-bringer). Khaos was the lower atmosphere which surrounded the earth - invisible air and gloomy mist. His name Khaos literally means the gap, the space between heaven and earth. Khaos was the Father or grandfather of the other substances of air: Nyx (Night), Erebos (Darkness), Aether (Light) and Hemera (Day), as well as the various emotion-affecting Daimones which drifted through it. He was also a god of fate like his daughter Nyx and granddaughters the The Moirai (The Fates).

Later authors defined Khaos as the chaotic mix of elements that existed in the primeval Universe, confusing it with the primeval Mud of the Orphic cosmogonies, but this was not the original meaning. Khaos has no father or mother or creator (possibly). He is self - created, he knowns everything that happens in the Universe every moment and is '' omni - potent ''. His children are the Protogenoi, including Ouranos, Ananke, Gaia, Nyx, Eros, Erebos, Eros and many others. Perhaps some other cosmic Highests and maybe even the Primordial gods of Norse Mythology too.

"Verily at the first Chaos came to be, but next wide-bosomed Earth, the ever-sure foundations of all the deathless ones who hold the peaks of snowy Olympus, and dim Tartarus in the depth of the wide-pathed Earth, and Eros (Love), fairest among the deathless gods, who unnerves the limbs and overcomes the mind and wise counsels of all gods and all men within them. From Chaos came forth Erebus and black Night; but of Night were born Aether and Day, whom she conceived and bare from union in love with Erebus. And Earth first bare starry Heaven, equal to herself, to cover her on every side, and to be an ever-sure abiding-place for the blessed gods. And she brought forth long Hills, graceful haunts of the goddess-Nymphs who dwell amongst the glens of the hills. She bare also the fruitless deep with his raging swell, Pontus, without sweet union of love. But afterwards she lay with Heaven and bare deep-swirling Oceanus, Coeus and Crius and Hyperion and Iapetus, Theia and Rhea, Themis and Mnemosyne and gold-crowned Phoebe and lovely Tethys. After them was born Cronos the wily, youngest and most terrible of her children, and he hated his lusty sire."

Khaos was an extremely powerful and formless Protogenoi Deity, and the first of his kind.

Chaos was the non-personified concept of the gap between heaven and earth. In some versions of the myth, the egg of creation was born out of this gap encircled by Chronos (time) and Ananke (inevitability/ fate). They proceed to crack the egg and start the other Protogenoi. However, Khaos does have a true form, as he is actually the christian God.

The Bible says that the Universe was created by the God. It says that when God's divine power was spread all around, the other gods were formed, like Uranus and Gaia and the other primordials. Then the other generations of gods were to be, including the Olympians and the Titans. This likely means that the mythological god Khaos and the God of Christianity are the same person. Khaos is omni - potent, at least as a symbol, as he is the christian god. 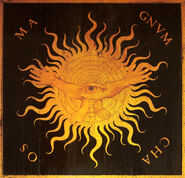 Khaos from God of War