Delphin (Gr: Δελφιν) was the God of dolphins. He was the deity who succeeded in convincing Amphitrite to marry Poseidon. Poseidon, wanting to remember him, placed him in the sky as the Delphinus constellation.

Delphin was a dolphin in the service of the god Poseidon. When his master was wooing Amphitrite and she fled, Delphin went in search of the nymph and persuaded her to agree to the marriage. For his service Poseidon placed him amongst the stars as the Constellation Delphinus (the Latin word for Delphin). 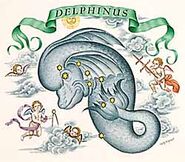