Dryope was one of the Mysian Nymph Naiades were Pegaiai Naiades (Naiad Nymphs of the Springs). She lived in a local spring at Askanios in eastern Mysia (the north-western region of Anatolia).

Dryope only appears in one myth but it is notable because it is a case of reverse gender rape. Hylas (an Argonaut and close companion of Herakles) had been sent to fetch water. When Hylas came to the spring where Dryope and the other Naides dwelt she (and possibly some of her sisters) immediately fell in love with him. As he reached down to fill his jug with water she grabbed him with one arm to kiss him and the other to grab and abduct him.

"Hylas had bone off by himself with a bronze ewer in search of some hallowed spring where he could draw some water for the evening meal . . . Hylas soon found a spring, which the people of the neighbourhood call Pegai. He reached it when the Nymphai were about to hold their dances--it was the custom of all those who haunt the beautiful headland to sing the praise of Artemis by night. The Nymphai of the mountain peaks and caverns were all posted some way off to patrol the woods; but one, the Naias of the spring, was just emerging from the limpid water as Hylas drew near. And there, with the full moon shining from a clear sky, she saw him in all his radiant beauty and alluring grace. Her heart was flooded by desire; she had a struggle to regain her scattered wits. But Hylas now leant over to one side to dip his ewer in: and as soon as the water was gurgling loudly round the ringing bronze she threw her left arm round his neck in her eagerness to kiss his gentle lips. Then with her right hand she drew his elbow down and plunged him in midstream . . ." Argonautica 1. 1334 ff (trans. Rieu) (Greek epic C3rd B.C.) Apollonius Rhodius

Later in the poem The sea-god Glaukos later reports to the Argonauts: ‘As for Hylas, who caused these two to go astray and so be left behind, a Nymphe has lost her heart to him and made him her husband.’"

Hylas and the Water Nymphs (by Henrietta R. Rae) 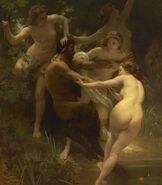 Add a photo to this gallery
Retrieved from "https://greekmythology.wikia.org/wiki/Dryope_(Pegaiai)?oldid=72459"
Community content is available under CC-BY-SA unless otherwise noted.