The "Elder Python" (Πυθων) is the monster that occupied Delphi. Apollo shot it with his arrows and constructed his oracle in the place where he killed the Python.

The Elder Python is mentioned in "The Hidden Oracle" as having taken back the Oracle of Delphi (the oracle which Apollo took over by slaying the Elder Python). 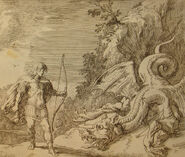 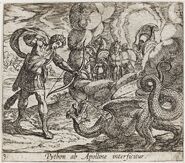 Add a photo to this gallery
Retrieved from "https://greekmythology.wikia.org/wiki/Elder_Python?oldid=74162"
Community content is available under CC-BY-SA unless otherwise noted.