Eos (Ηως) was the goddess of the dawn. She was the daughter of Hyperion, the Titan of light, and Theia, the Titan of sight. Her siblings were Helios, Titan of the Sun, and Selene, Titan the moon. Eos personified the short transition from night to day and possibly also day to night.

Each and every day, Eos rose from the rivers of Poseidon and brought along dawn. How she did this varies between myths. In some myths she was carried in a gold chariot by winged horses or she had her own pair of white wings that sparkled that allowed her to fly.

Some myths also say that Aphrodite cursed Eos so that she loved good-looking and young men. She would also sometimes carry away mortal men that were good-looking.

Eos once fell in love with a young man named Tithonos. The only problem that Eos saw was that how could she marry this man if she was immortal and he was just a mortal. Eos then went to Zeus and asked him to give him an eternal life. Zeus did as she asked but he didn't grant him eternal youth. Tithonos continued to age on and on until he eventually became the first grasshooper. Their sons were Memnon, king of Ethiopia, and Emathion, king of Arabia. 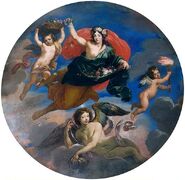 Retrieved from "https://greekmythology.wikia.org/wiki/Eos?oldid=78151"
Community content is available under CC-BY-SA unless otherwise noted.