Europa was a princess whom Zeus abducted in the form of a bull. She was the mother of King Minos and King Rhadamanthys both of whom would become judges if the dead

Zeus was shot by one of Eros' arrows and fell in love with the princess Europa. Unsure how to get to the princess with her handmaiden's around, Zeus took the form of a tame White Bull and approached them all. The handmaidens were afraid but Europa was not. To show she was not going to be harmed, Europa mounted the Bull (Zeus). As soon as she was on his back Zeus ran to the sea and swam to the island of Crete. Once at Crete Zeus revealed his true form and made love to Europa. Europa would become the first queen of Crete. 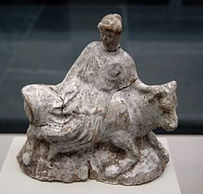 Statue of Europ and Zeus 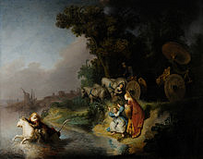 Abduction of Europa by Rembrant 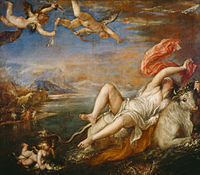 Rape of Europa 1772 Francisco de Goya
Add a photo to this gallery
Retrieved from "https://greekmythology.wikia.org/wiki/Europa?oldid=73490"
Community content is available under CC-BY-SA unless otherwise noted.