The Gorgons were three monstrous sisters with snakes for hair. Traditionally two of them are immortal, Stheno and Euryale, while Medusa, the third, was not.

Terrifying creatures, the Gorgons are described as having live, venomous snakes for hair. Other, less common, attributes included scaly skin, golden wings, and boar like fangs.

The most interesting attribute given to them is their ability to turn anyone who looks upon them to stone. As shown by Perseus, this effect continues after death.

Attic Black Figure of a Gorgon 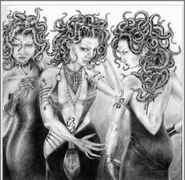 The Gorgons
Add a photo to this gallery

Retrieved from "https://greekmythology.wikia.org/wiki/Gorgons?oldid=74530"
Community content is available under CC-BY-SA unless otherwise noted.