After Perseus beheaded Medusa, he took her head as a war trophy. After using it to turn king Polydectes into stone, he carried it with him on many adventures, and turning his enemies to stones. At some point in time, he gave the head to Athena to put on her Aegis and forge it into a deadly weapon. 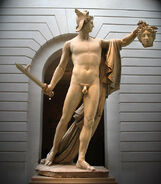 11Perseus.jpg
Add a photo to this gallery

Retrieved from "https://greekmythology.wikia.org/wiki/Head_of_Medusa?oldid=74531"
Community content is available under CC-BY-SA unless otherwise noted.