Helen of Troy was the demigoddess daughter of Zeus and Leda. She was taken by Paris as his wife (since she was considered to be the most beautiful woman in the world), which caused the Trojan War. She has 3 childrens with him named Idaeus, Bunomus and Corythus. Sadly all of her childrens with Paris died in the roof of Troy.

She originally was the wife of Menelaus, king of Sparta, and had a daughter, alongside 3 sons with him named Hermione, Aethiolas, Maraphius and Pleisthenes. At the end of the Trojan War, she was taken back to Sparta to live with her husband and daughter again. Menelaus was enraged by Helen's betrayal, but when Helen took off her cloak to revealing her breast, Menelaus calmed down.

In some sources, she was abducted by Theseus, but was then saved by Castor and Pollux. The twin brothers then forced Theseus' mother to be Helen's slave. 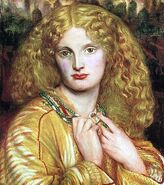 Retrieved from "https://greekmythology.wikia.org/wiki/Helen_of_Troy?oldid=79187"
Community content is available under CC-BY-SA unless otherwise noted.