Hephaistos, better known as Hephaestus (Ancient Greek: Ἡφαιστος) was the Greek god of metalworking, smithing, sculpture, masonry, fire and volcanoes. He was the patron god of all artisans, blacksmiths, craftsmen, and sculptors. According to Homeric traditions, he was the son of Zeus and Hera, but later traditions state that he had no father, and that Hera gave birth to him independent of Zeus, as she was jealous of Zeus having given birth to Athena independent of her. This, however, is opposed to the common story, that Hephaistos split the head of Zeus, and thus assisted him in giving birth to Athena, for Hephaistos is there represented as older than Athena. A further development of the later tradition is, that Hephaistos sprang from the thigh of Hera, and, being for a long time kept in ignorance of his parentage, he at length had recourse to a stratagem, for the purpose of finding it out. He constructed a chair, to which those who sat upon it were fastened, and having thus entrapped Hera, he refused allowing her to rise until she had told him who his parents were.

As a smithing god, Hephaistos made all the weapons of the gods in Olympus. He served as the blacksmith of the gods, and was worshipped in the manufacturing and industrial centers of Greece, particularly Athens. The cult of Hephaestus was based in Lemnos. Hephaistos's symbols are a smith's hammer, anvil, and a pair of tongs. His Roman equivalent was Vulcan.

Hephaistos was the manufacturer of art, arms, iron, jewelry and armor for various gods and heroes, including the thunderbolts of Zeus. He was the son of Zeus and Hera, and husband of Aglaia and Aphrodite. His smithy was believed to be situated underneath Mount Aitna in Sicily.

He designed Hermes' winged helmet and sandals. The Aegis breastplate, Aphrodite's famed girdle, Agamemnon's staff of office, Akhilles' armor, Herakles' bronze clappers, Helios' chariot, the shoulder of Pelops, and Eros' bow and arrows. In later accounts, Hephaistos worked with the help of the chthonic Kyklops—among them his assistants in the forge, Brontês, Steropês and Argês.

Hephaistos also built automatons of metal to work for him. This included tripods that walked to and from Mount Olympus. He gave to the blinded Orion his apprentice Kedalion as a guide. Prometheus stole the fire that he gave to man from Hephaistos's forge. Hephaistos also created the gift that the gods gave to man, the woman Pandora and her pithos. Being a skilled blacksmith, Hephaistos created all the thrones in the Palace of Olympus.

As the son of Zeus, the king of the gods, and Hera, the queen of the gods, Hephaistos should have been quite handsome, but, baby Hephaistos was small and ugly with a red, bawling face. Hera was so horrified that she hurled the tiny baby off the top of Mount Olympus.

Hephaistos fell down for a day and a night, landing in the sea. Unfortunately, one of his legs broke as he hit the water, and never developed properly. From the surface, Hephaistos sunk like a pebble to the cool blue depths where the sea-nymph, Thetis, found him and took him to her underwater grotto, and raised him as her own son.

Hephaistos had a wretched childhood. When Hera found that he was disfigured, she threw him off Mount Olympus. He grew up in Lemnos. Late in his childhood, he found the remains of a fisherman's fire on the beach and became fascinated with an unextinguished coal, still red-hot and glowing. In other myths, he was thrown off Mount Olympus by Zeus for a whole day down to Lemnos for siding with Hera in an argument.

Hephaistos carefully shut this precious coal in a clamshell and took it back to his underwater grotto and made a fire with it. On the first day after, Hephaistos stared at this fire for hours on end. On the second day, he discovered that when he made the fire hotter with bellows, certain stones sweated iron, silver or gold. On the third day he beat the cooled metal into shapes: bracelets, chains, swords and shields. Hephaistos made pearl-handled knives and spoons for his foster mother, a silver chariot for himself, and bridles so that seahorses could transport him quickly. He even made slave-girls of gold to wait on him and do his bidding.

One day, Thetis left her underwater grotto to attend a dinner party on Mount Olympus wearing a beautiful necklace of silver and sapphires, which Hephaistos had made for her. Hera admired the necklace and asked her where she could get one. Thetis became flustered causing Hera to become suspicious and, at last, the queen god discovered the truth: the baby she had once rejected had grown into a talented blacksmith.

Hera was furious and demanded Hephaistos return home, a demand that he refused. However, he did send Hera a beautifully constructed chair made of silver and gold, inlaid with mother-of-pearl. Hera was delighted with this gift but as soon as she sat on it her weight triggered hidden springs and metal bands that sprung forth to hold her fast. The more she shrieked and struggled the more firmly the mechanical throne gripped her; the chair was a cleverly designed trap.

For three days Hera sat fuming, still trapped in Hephaistos's chair; she could not sleep, she could not stretch, she could not eat. Zeus pleaded with Hephaistos to dislodge Hera, but he steadfastly refused. Dionysus at last brought Hephaistos back to Olympus by getting him drunk and carrying him on a donkey. Then, on the condition Aphrodite would be given to Hephaistos as his wife, Hera was freed.

Hephaistos, being the most unfaltering of the gods, was given Aphrodite's hand in marriage by Zeus to prevent conflict over her between the other gods.

Hephaistos and Aphrodite had an arranged marriage, and Aphrodite, disliking the idea of being Hephaistos discovers Aphrodite's promiscuity through Helios, the all-seeing Sun, and planned a trap during one of their trysts. While Aphrodite and Ares lay together in bed, Hephaistos ensnared them in an unbreakable chain-link net so small as to be invisible and dragged them to Mount Olympus to shame them in front of the other gods for retribution.

However, the gods laughed at the sight of these naked lovers, and Poseidon persuaded Hephaistos to free them in return for a guarantee that Ares would pay the adulterer's fine. Hephaistos states in the Odyssey that he would return Aphrodite to her father and demand back his bride price.

The Thebans told that the union of Ares and Aphrodite produced Harmonia. However, of the union of Hephaistos with Aphrodite, there was no issue unless Virgil was serious when he said that Eros was their child. Later authors explain this statement by saying the love-god was sired by Ares but passed off to Hephaistos as his own son.

Hephaistos was somehow connected with the archaic, pre-Greek Phrygian and Thracian mystery cult of the Kabeiroi, who were also called the Hephaistoi, "the Hephaistos-men," in Lemnos. One of the three Lemnian tribes also called themselves Hephaestion and claimed direct descent from the god.

Hephaistos is to the male gods as Athena is to the females, for he gives skill to mortal artists and was believed to have taught men the arts alongside Athena. He was nevertheless believed to be far inferior to the sublime character of Athena. At Athens they had temples and festivals in common. Both were believed to have great healing powers, and Lemnian earth (terra Lemnia) from the spot on which Hephaistos had fallen was believed to cure madness, the bites of snakes, and haemorrhage, and priests of Hephaistos knew how to cure wounds inflicted by snakes.

He was represented in the temple of Athena Chalcioecus (Athena of the Bronze House)at Sparta, in the act of delivering his mother; on the chest of Kypselos, giving Achilles's armor to Thetis; and at Athens there was the famous statue of Hephaistos by Alcamenes, in which his lameness was only subtly portrayed. The Greeks frequently placed small dwarf-like statues of Hephaistos near their hearths, and these figures are the oldest of all his representations. During the best period of Grecian art he was represented as a vigorous man with a beard, and is characterized by his hammer or some other crafting tool, his oval cap, and the chiton.

According to most versions, Hephaistos's consort is Aphrodite, who is unfaithful to Hephaistos with a number of gods and mortals, including Ares. However, in Homer's Iliad, the consort of Hephaistos is a lesser Aphrodite, Charis "the grace" or Aglaia "the glorious" — the youngest of The Graces, as Hesiod calls her.

In Athens, there is a Temple of Hephaistos, the Hephaesteum (miscalled the "Theseum") near the agora. An Athenian founding myth tells that the city's patron goddess, Athena, refused a union with Hephaistos because of his unsightly appearance and crippled nature, and that when he became angry and forceful with her, she disappeared from the bed. His ejaculate fell on the earth, impregnating Gaia, who subsequently gave birth to Erichthonius of Athens. A surrogate mother later gave the child to Athena to foster, guarded by a serpent.

Hephaistos fathered several children with mortals and immortals alike. One of those children was the robber Periphetes.

This is the full list of his consorts and children according to the various accounts:

Gallery of Symbols of Hephaistos & Things Sacred to Hephaistos 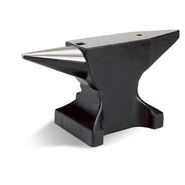 Gallery of Images of Hephaestus

Bronze Sculpture of Hephaistos God of the Forge

Hephaestus at the Forge by Guillaume Coustou the Younger (Louvre)

Thetis Receiving the Weapons of Achilles from Hephaestus by Anthony van Dyck, 1630-32. 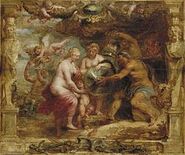 Vulcan (Roman counterpart of Hephaestus) presenting the arms of Achilles to Thetis. By Peter Paul Rubens. 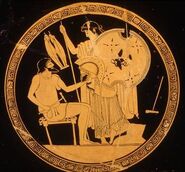