Hermes was the Olympian God of travel, roads, thievery, merchants, athletics, and travelers. He was also the messenger of the Gods. Hermes is the fastest Greek god.

His Roman name is Mercury.

Hermes has never been said to have reigned, but with his connection to Zeus, most-likely had a favor from his father in order for his bidding to be carried out or to sabotage other gods.

Hermes was the son to Zeus and Maia. Hermes was known for speed.

Hermes snuck away while his mother slept. He went out to Apollo's golden sun cattle. He picked the fifty best cows, and fasted a broom on their tails and bark on their hooves. To confuse Apollo further, he herded them backwards, and fastened bundles of branches unto his feet, making it look as if a giant herded something in, but nothing out. He sacrificed them to the Olympians, including himself. He took the entrails of the sacrificed cows and made the lyre. Apollo stormed into the cave, because he had just realized what had happened, and demanded Hermes to give him his cattle. Hermes told him there were no cattle in his mothers cave. Apollo stormed up to Olympus and told the problem to Zeus. The Olympians laughed. Zeus told Hermes to take Apollo to his cattle, and so he did. Apollo forgave him, but counted his cows. There were two missing, and his anger flared back. Before he could do anything, Hermes played his lyre. Apollo calmed and asked for the lyre. Hermes drove a hard bargain, asking for his Caduceus and his whole herd. Apollo grudgingly agreed.

When he arrived to become an Olympian, Zeus needed someone to leave Olympus to bring the gods' words to the mortals. Hermes chose Athena, and Athena chose Hermes. His argument was settled by a vote upon the Olympians and Hermes. Aphrodite, Hephaestus, Apollo, and Ares chose Hermes. Hermes had left and went down to earth, helping mortals. Hermes was given magic sandals, a golden winged hat, and a cape to hide his things in. He was made Zeus's messenger.

Io and an Argument

Zeus told Hermes to set free Io from Hera's secret garden. He went there, and sang a song to Argus. After this, told him a long, boring story. Argus closed fifty eyes, then the other fifty. He had died of boredom. He set Io free. Hera was angry at Hermes for killing her servant, and called for a vote to kill him. Hera tossed a pebble at Hermes, and the others threw pebbles at him. He was soon covered in pebbles. Hermes was forgiven, and all was right again.

Hermes had a lot of lovers so here the main ones!

Hermes is usually depicted as a young man with an athletic build. He is often dressed in a toga, but his winged hat and sandals make him easy to indetify. Hermes was cheerful, good humored, cunning, and because he was the messenger god he was the fastest of the Olympians. 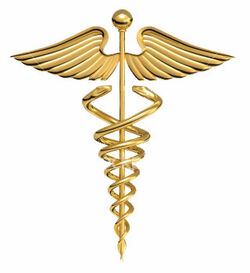 Hermes' symbols include the Caduceus, a leather pouch winged sandals, a rooster and a ram which is his hat.

Bronze Statue of Hermes Messenger God of the Olympians 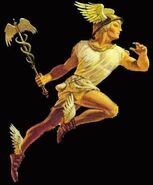 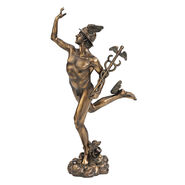 Hermes, drawn by author George O Connor.
Add a photo to this gallery

Retrieved from "https://greekmythology.wikia.org/wiki/Hermes?oldid=78507"
Community content is available under CC-BY-SA unless otherwise noted.