Hippokampi are horses of the sea. Poseidon's chariot is pulled by four giant Hippokampi.

The Hippokampi is a creature which has the frontparts of a horse and the rear part of a fish.  They are often shown pullung the chariot of either Okeanos or Poseidon.  Thetis is also often depicted shown riding on the back of a single Hippokampoi. 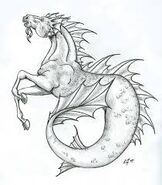 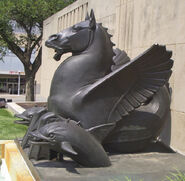 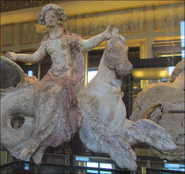 Hippokampoi pulling a chariot with Amphitrite and Poseidon

Hippocampus in Percy Jackson: Sea of ​​Monsters.
Add a photo to this gallery
Retrieved from "https://greekmythology.wikia.org/wiki/Hippokampoi?oldid=75144"
Community content is available under CC-BY-SA unless otherwise noted.