Hippolyta was a queen of the Amazons. She had a magic girdle.

For Herakles' Ninth Labor he was sent to retrieve the Girdle of Hippolyta. Herakles impressed her with his strength and she gave the Girdle to him. Upset that the task was accomplished with such ease Hera caused confusion and made one of the Amazons believe Herakles was trying to hurt Hippolyta. A fight broke out in which Herakles killed several Amazons inadvertently killing Hippolyta as well. 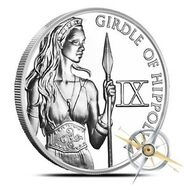 Nicolaes Knüpfer - Hercules Obtaining the Girdle of Hyppolita - WGA12217.jpg
800px-Heracles gets the Belt of Hippolyte, Queen of the Amazons.jpg
Add a photo to this gallery

Retrieved from "https://greekmythology.wikia.org/wiki/Hippolyta?oldid=77124"
Community content is available under CC-BY-SA unless otherwise noted.