Hyakinth or Hyakinthos (γ'ακνθος) was a homesome young Spartan prince, son of Kleio and Pierus, loved by the gods Apollo and Zephyros (Anemoi) and in some myths the bard Tharmyris. The West Wind Zephyros (Anemoi), grew jealous of his rival in love, and one day as the pair were playing discus blew the discus off course it to strike Hyakinthos in the head and kill him. The grieving Apollo then transformed the dying youth into a larkspur flower (hyakinthos in Greek) which he inscribed with the, wail of mourning "Al Al" which Translates to Alas Alas

A Story of Jealous

Apollo was passionately fond of Hyakinthos. He accompanied him in his sports, carried the nets when, he went fishing, led the dogs when he went to hunt, followed him in his excursions in the mountains, and neglected for him his lyre and his arrows.

One day they played a game of quoits (discus) together, and Apollo heaving aloft the discus with strength mingled with skill, sent in high forward to seize it, eager to make his throw, when the quoit bounded from the earth, so the head of the

dying boy, as if too heavy for his neck, fell over on his shoulder. "Thou diest, Hyakinth, " so spoke phoebis, "robbed of thy youth by me. Thine is the suffering, mine the crime. Whold that I could die for three! But since that may not be, thou shalt live with me in memory and in song. My lyre shall celebrate thee, my song shall tell tyy fate, and thou shalt beacome a flower inscribed with my regrets." While Apollo Spoke, behold the blood; which had flower on the ground and stained the herbage ceased to be blood; but a flower of hue more beautiful than the Tyrian sprang up, resembling the lily. And this was not enough for Phoebus; but to confer still greater honor, he marked the petals with his sorrow, and inscribed "Ah! ah!"Upon them as we see to this day. The flower bears the name of hyakinthos, and with every retuing spring revives the of his fate.

According to a different myth it was Zephyros who caused the death of the death young man; jealous of his affair Apollo he blew the discus to Hyakinthos'head killing him. Apollo distraught at the youth's death,forbade Hades to claim his soul; instead turned him into the flower of the same name. 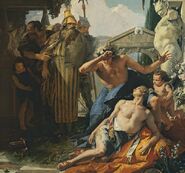 The Death of Hyacinth by Giovanni Batista Tiepolo

Hyacinthus and Zephyrus on a red-figure vase

The Death of Hyacinthos by Jean Broc 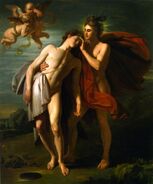 Death of Hyacinthus
Add a photo to this gallery
Retrieved from "https://greekmythology.wikia.org/wiki/Hykinthos?oldid=75438"
Community content is available under CC-BY-SA unless otherwise noted.