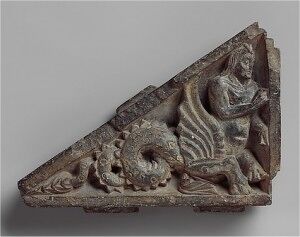 The Ikhthyokentauroi were a pair of centaur-like sea creatures that had the upper bodies of men, lower fore-legs of horses and rather than having horse hind-legs, they had fish-like tails. On their brows they had lobster-like claw horns. They are the children of Kronus. They are best known for the painting where they pull a clam with Aphrodite in it

The two Ichthyocentaurs were called Bythos (sea-depths) and Aphros (sea-foam). It is presumed that they were seen as wise teachers like their half-brother, Chiron.