Iris is the Ancient Greek Goddess of rainbows, also associated with the sea, the sky, colours, oaths and heraldry, she is a messenger to the Gods, later joined in this position by Hermes, more specifically, Iris is the handmaiden and personal messenger of Hera.

She was born to a Titan sea god, Thaumos and his wife, Elektra an Oceanid, she is twin sister to Arke, both of whom personified the rainbow and are also sisters to the Harpies. During the Titanomachy, she became messenger to the Olympian Gods, whilst her sister, Arke joined the Titans as their Messenger. She later married God of the West Wind, Zephyros and they may have been the parents of Pothos,the personification of Yearning or Longing, who is part of The Erotes.

As well as creating rainbows, and delivering messages, she was tasked with maintaining the clouds, by pouring water into them.

Iris was present during Leto's Labour, and was the one that asked Eileithyia to help Leto give birth to Apollo.

Iris, is a portrayed as a beautiful young woman with golden wings, who carries a caduceus or a bucket of water on her journeys. 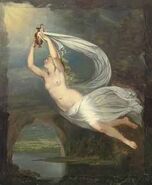 Add a photo to this gallery
Retrieved from "https://greekmythology.wikia.org/wiki/Iris?oldid=77928"
Community content is available under CC-BY-SA unless otherwise noted.