Ixion had originally been invited to Olympus, while there he made unwanted advances towards Hera.  Hera complained to Zeus who decided he needed proof.  Zeus took a cloud and molded it into a phantom in the form of Hera.  Later Ixion attempted to take advantage of the cloud that had been shaped into Hera and provided Zeus the proof.

Centaurus (Father of a race of Kentaurs)

To punish Ixion, Zeus made him immortal then tied him to a flaming wheel and sent him into the sky to bee burning for all eternity

From the union of Ixion and the cloud nymph were 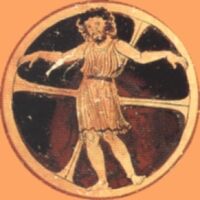 Ixion on the wheel 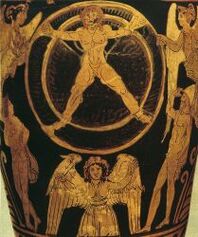 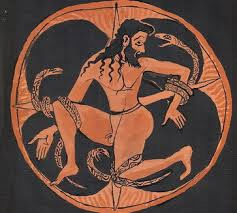 Ixion bound to his wheel by snakes

Ixion in Tartarus bound to the wheel
C0014.jpg
Ixion1 .jpg
Add a photo to this gallery
Retrieved from "https://greekmythology.wikia.org/wiki/Ixion?oldid=75448"
Community content is available under CC-BY-SA unless otherwise noted.