Jason (Gr: Ἰάσων) was a mortal hero famous for leading the Argonauts in their quest for the Golden Fleece. Though unusual, Jason was favored by Hera, the queen of the gods, because he had no parent or god to guide him.

The Argonauts and the Golden Fleece

After being announced as the kings successor, the king set Jason the task of acquiring the Golden Fleece before he would become the king himself. Jason acquired a boat called the Argo and assembled a group of followers for his quest, whom became named after the boat: the Argonauts. Jason set sail to Colchis, where the Golden Fleece was located, enduring many adventures and hardships en route.

The crazy, bloodthirsty princess of Colchis, Medea fell in love with Jason, a strong, dashing, handsome hero, and Jason wished to steal a treasure from Medea's father's kingdom, the golden fleece. In exchange for her help stealing the fleece, Jason was to marry Medea and take her away with him, and Jason agreed. Jason married Medea as he promised, being "a hero of his word", but after getting Medea's help to steal the golden fleece, he required Medea's help still, because as Jason and Medea fled, her brother's fleet came after them, trusting her, where she killed her brother. On the way back from Colchis, Jason's ship landed at another kingdom, and Jason agreed to dump Medea because she was crazy and bloodthirsty to marry the king's daughter. For her revenge, Medea murdered her children and poisoned Jason's fair new wife.

Jason's death came in a relatively anti-climactic way. Years after The Quest for the Golden Fleece ended Jason left Medea thus falling out of favor with Hera who caused the mast of the Argo to fall on Jason killing him with him under The Argo

Sculpture of Jason with the Golden Fleece by Bertel Thorvaldsen 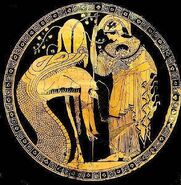 Add a photo to this gallery
Retrieved from "https://greekmythology.wikia.org/wiki/Jason?oldid=78474"
Community content is available under CC-BY-SA unless otherwise noted.