Kalais like his brother Zethes are the Boreads. They are immortal sons of Boreas the God of the North Wind. Zethes and Kalais were Argonauts and are identifiable because of their wings. After their time with Jason and the Argonauts, they joined the service of their father and became immortal.

"Next came Zetes and Calais, sons of Boreas, whom once Oreithyia, daughter of Erechtheus, bare to Boreas on the verge of wintry Thrace; thither it was that Thracian Boreas snatched her away from Cecropia as she was whirling in the dance, hard by Hissus' stream. And, carrying her far off, to the spot that men called the rock of Sarpedon, near the river Erginus, he wrapped her in dark clouds and forced her to his will. There they were making their dusky wings quiver upon their ankles on both sides as they rose, a great wonder to behold, wings that gleamed with golden scales: and round their backs from the top of the head and neck, hither and thither, their dark tresses were being shaken by the wind."
- Apollonius of Rhodes, Argonautica 1.221 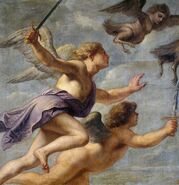 The Boreads chasing away Harpies 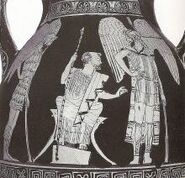