The Kalydonian Boar (Hus Kalydonios) was a huge boar that was summoned by Artemis.

After King Oineus of Kalydon, refused to offer the gods the first fruits that were harvested, Artemis summoned the boar and sent it to attack the countryside.

After the King was informed about the beast he summoned various heroes to kill the beast. King Oineus' son Meleagros led the Kalydonian Boar Hunt and also killed the boar himself. He gave the hide to Atalanta for drawing the first blood. Atalanta offered the skin to Artemis by hanging it from a tree in her sacred Arkadian grove. 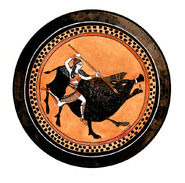 The Hunt for the Kalydonian Boar: Meleager and Atalanta (Etruscan Era)