Kalypso (Καλυψω) was the daughter of one of the Titans, generally being regarded as a daughter of Atlas, and probably Klymene. Because of her father siding with the Titans in the Titanomachy, she was exiled to the island Ogygia, which she could never leave. When Odysseus landed on her island in the Odyssey, she fell in love with him. However, despite her best attempts and baring him two sons; Nausithous, Nausinous, and Latinus. Kalypso could not make him happy and allowed him to make a raft and leave. Hesiod mentions either different Kalypsos or the same Kalypso as one of the Okeanid daughters of Tethys and Okeanus.

Kaltpso & Odysseus on the shores of Ogygia

Kalypso goddess of the island of Ogygia 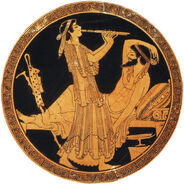 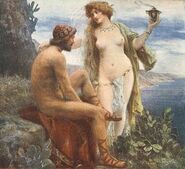 Retrieved from "https://greekmythology.wikia.org/wiki/Kalypso_(Goddess)?oldid=75449"
Community content is available under CC-BY-SA unless otherwise noted.