Cassiopeia was an Eithiopian queen who boasted of her beauty saying she was more beautiful than Aphrodite herself. Aphrodite asked Zeus to punish their kingdom. Zeus had Poseidon release the Ketos Aithiopios (or Ethiopian Cetus). The King, Kepheus consulted the Oracle about how to get rid of the monster it told her to chain Andromeda to a rock and sacrifice the princess to the monster. Perseus arrived (wearing Hades' Helm of Invisibility, Hermes' winged sandals and the sword Hephaestus had made for him) he flew over and being invisible got close enough to slay the monster and break the chains binding Princess Andromeda. 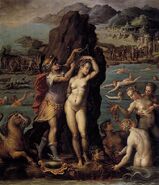 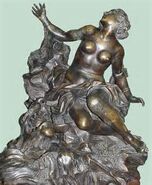 Ketos23.jpg
Add a photo to this gallery
Retrieved from "https://greekmythology.wikia.org/wiki/Kassiopeia?oldid=69995"
Community content is available under CC-BY-SA unless otherwise noted.