Greek Mythology Wiki
Register
Don't have an account?
Sign In
Advertisement
in: Monsters, Beasts, The Eleventh Labor: Steal the Apples of the Hesperides,
and 2 more

The Aetos Kaukasios or The Kaukasios Eagle is a giant eagle that was summoned by Zeus to be used in the punishment and torture of Prometheus.

After Prometheus had betrayed Zeus and given fire to the humans, he was chained to the top of a mountain so that every day the Kaukasios Eagle would fly to him and eat out his liver. Since he was immortal, his liver would regrow and would be eaten out the next day.

In some myths, Herakles killed the eagle and freed Prometheus. 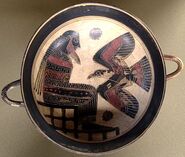 Prometheus Tortured By The Eagle by Christian Griepenkerl (1839-1916)