King Midas (Ancient Greek: Μίδας) was a king of Phrygia (Anatolia). He is best known for the myth of Midas and the Golden Touch and for judging a music contest between Pan and Apollo.

There are many, and often contradictory, legends about the early life of ancient King Midas.

In one, Midas a child adopted by King Gordias and Cybele.

According to another, Midas was the son of Gordios, a poor peasant, and a Telmissian maiden of the prophetic race. When Midas grew up to be a handsome and valiant man, the Phrygians were harassed by civil discord, and consulting the oracle, they were told that a wagon would bring them a king, who would put an end to their discord. While they were still deliberating, Midas arrived with his father and mother, and stopped near the assembly, wagon and all. They, comparing the oracular response with this occurrence, decided that this was the person whom the god told them the wagon would bring. They therefore appointed Midas king and he, putting an end to their discord, dedicated his father's wagon in the citadel as a thank-offering to Zeus the king.

The most famous myth about King Midas is when he received the golden touch from Dionysus.

Dionysus found that his old schoolmaster and foster father, the satyr Silenus, was missing. The old satyr had been drinking wine and wandered away drunk, to be found by some Phrygian peasants who carried him to their king, Midas (alternatively, Silenus passed out in Midas' rose garden). Midas recognized him and treated him hospitably. For his kind treatment of Silenus Midas was rewarded by Dionysus with a wish. Dionysus gave him the gift.

Initially, King Midas was thrilled with his new gift and turned everything he could to gold, including his beloved roses. His attitude changed, however, when he was unable to eat or drink since his food and wine were also changed to unappetizing gold. He even accidentally killed his daughter, Zoë, when he touched her, and this truly made him realize the depth of his mistake. Desperate, Midas pleaded to Dionysus for help. Dionysus instructed Midas to bathe in the headwaters of the Pactolus River, and the wish would be washed away. Midas went to the river, and as soon as he touched the water, the river carried away the golden touch.

Ears of an Ass

After the death of his daughter, Midas hated wealth and splendor and became a worshiper of Pan, god of woodlands. In another myth, Pan and Apollo had a disagreement about who was the better musician, and Pan challenged Apollo to a test of skill at music. Tmolos was the judge at the contest and ruled that Apollo was the victor. However, King Midas, being a follower of Pan, made a comment that he believed Pan to be better. This offended Apollo and as a punishment for Midas' lack of musical "taste", Apollo changed Midas' ears into donkey ears. Ashamed of his disfigurement, he hid his ears under a large hat with only his barber knowing about the deformity. It was so hard for the barber to keep the secret that he dug a hole, whispered the secret into the hole, then covered it with earth. From this spot grew reeds that whispered, "Midas has donkey ears!" every time the wind blew. Another version has the queen letting out the secret. In the end, Midas ran away from Phrygia never to be heard from again.In response to this, Apollo turned Midas' ears into those of a donkey. 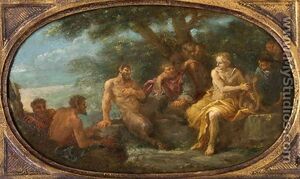 Midas judging the music contest between Pan and Apollo 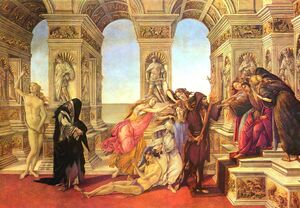 After the contest Apollo told Midas his ears must be those of a Donkey so he transformed Midas' ears, the king ended up wearing a hat and the only person to see the ears was his barbor 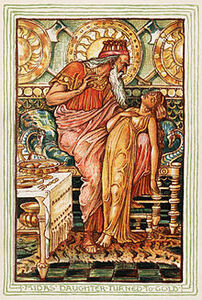 In the Nathaniel Hawthorne version of the Midas myth, Midas's daughter turns to a statue when he touches her. Illustration by Walter Crane for the 1893 edition. 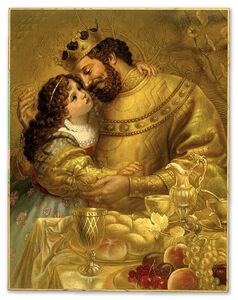 Midas and his daughter 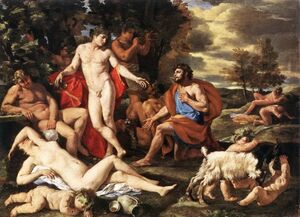 King Midas, Bacchus (Dionysus) and Silenus - Painting by Poussin
Add a photo to this gallery
Retrieved from "https://greekmythology.wikia.org/wiki/King_Midas?oldid=75463"
Community content is available under CC-BY-SA unless otherwise noted.