The Klazomenaian Sow was a giant pig with wings.

The Klazomenaian Sow was either shown as a monstrous child of Typhon and Ekhidna, the parents of all monsters, or Khrysaor, the offspring of Poseidon and Medusa.

Every day he terrorized the town of Klazomenai. The Sow was well known for its speed, eventually it would be killed by Theseus. 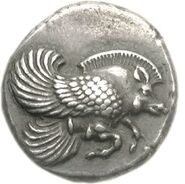 Retrieved from "https://greekmythology.wikia.org/wiki/Klazomenaian_Sow?oldid=77321"
Community content is available under CC-BY-SA unless otherwise noted.