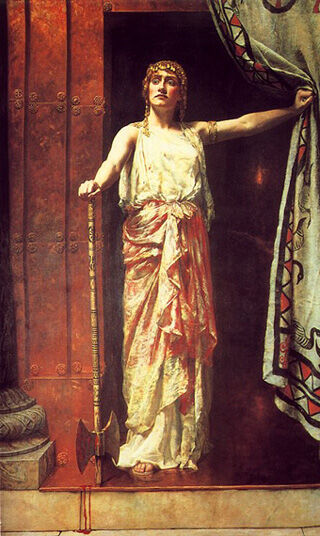 Agamemnon was leading Greek forces in the Trojan War in Troy. However, consistently weak winds prevented his ships from sailing. Through a subplot involving the gods, he was told that the winds would return if he sacrificed his daughter Iphigeneia to the goddess Artemis. He persuaded Klytemnestra to send Iphigeneia by deceptively telling her that the purpose of his daughter's visit was to marry her to Akhilles. When Iphigeneia arrived, she was sacrificed. Klytemnestra learned of this event and grieved for her daughter.

During this period of Agamemnon's long absence, Klytemnestra began a love affair with Aegisthus, her husband's cousin (they produced a daughter; Erigone). Whether Klytemnestra was seduced into the affair or entered into it independently differs according to the respective author of the myth. Nevertheless, Klytemnestra, enraged by Iphigeneia's murder (and presumably the earlier murder of her first husband by Agamemnon, and her subsequent rape and forced marriage), and Aegisthus, hungry for power, began plotting Agamemnon's demise.

Finally returning from Troy, Agamemnon arrived at his palace and was greeted by his wife. In tow was his concubine, the princess Kassandra. (Whether Klytemnestra was jealous of Kassandra is unknown. It was quite normal at the time for men to take concubines, usually acquired as war prizes, when on campaign.) Upon his arrival, he entered the palace for a banquet while Kassandra remained in the chariot. Klytemnestra waited until he was in the bath, and then entangled him in a cloth net and stabbed him. Entangled in the web, Agamemnon could neither escape nor resist his murderer. In Aeschylus' Agamemnon, Klytemnestra does the foul deed herself, but other texts, such as Homer's "Odyssey," mention others (see "Controversy").

Meanwhile, Kassandra saw a vision of herself and Agamemnon being murdered. Her attempts to elicit help failed (she had been cursed by Apollo so that no one would believe her prophecies). She realized that she was fated to die, and resolutely walked into the palace to accept her death.

After the murders, Aegisthus replaced Agamemnon as king and ruled for a few years with Klytemnestra as his queen. She was eventually killed by her own son Orestes.

Retrieved from "https://greekmythology.wikia.org/wiki/Klytemnestra?oldid=64261"
Community content is available under CC-BY-SA unless otherwise noted.