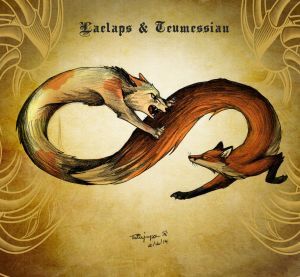 A magical dog destined to always catch its prey. Zeus had given it Europa as a gift, and it was later handed down to King Minos and then to Prokris of Athens.  Prokris' husband Amphitryon who had been given the task of catching the Teumessian Fox which had been ravishing the countryside of Thebes used the dog in his effort.  The fox, however, was destined never to be caught.  Zeus, perplexed by the conflicting fates of the two animals turned them both to stone and set them in the sky as Canis Major (Laelaps) and Canis Minor (Teumessian Fox).

The Death of Prokris by Piero di Cosimo depicting Pan, Prokris and Laelaps