Medea (Gr Μήδεια) was the daughter of King Aeëtes of Kolkhis, niece of Kirke, granddaughter of the sun god Helios, and later wife to the hero Jason, with whom she had two children, Mermeros and Pheres.

Her role began when Jason arrived in the kingdom of Kolkhis from Iolcus, to claim his inheritance and throne by retrieving the Golden Fleece. Medea fell in love with him, and promised to help him as long as he would take her with him on his way back to his country and marry her if he succeeded. He agreed. Medea made potions to help Jason and lulled the dragon that guarded the Golden Fleece to sleep. Medea also helped Theseus distract Talos.

Medea later on became a murderer. Along the way when they were being pursued by Aeëtes' men, she chopped her brother, Absyrtus, into pieces, and scattered them in the ocean, knowing her father would stop to retrieve them for proper burial. She also told the daughters of Pelias to cut up their father and put him in boiling water. When Jason leaves Medea because Creon, king of Corinth, offers him his daughter,Glauce, she killed the new bride by soaking her wedding dress and veil in poison. The king also died trying to get the wedding dress and veil of his daughter. Then Medea killed two of her sons just to get back at Jason.

She later became involved with Aegeus and became the queen of Athens. She had attempted to kill Theseus by giving a goblet of poisoned wine. When this was discovered by Aegeus, Medea fled from Athens. 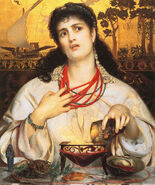 Medea by Anthony Frederick Augustus Sandys (painted 1866-68); its rejection for exhibition at the Royal Academy in 1868 caused a storm of protest 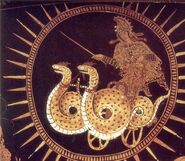 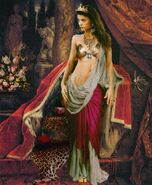 Add a photo to this gallery
Retrieved from "https://greekmythology.wikia.org/wiki/Medea?oldid=64326"
Community content is available under CC-BY-SA unless otherwise noted.