In Greek mythology, Medusa (/məˈdjuːzə, məˈdʒuː-, -sə/, US: /məˈduː-/; Μέδουσα "guardian, protectress") was a monster, a Gorgon, generally described as a winged human female with living venomous snakes in place of hair. Gazers upon her face would turn to stone. Most sources describe her as the daughter of Phorkys and Keto, though the author Hyginus makes her the daughter of Gorgon and Ceto. According to Hesiod and Aeschylus, she lived and died on an island named Sarpedon, somewhere near Cisthene. The 2nd-century BCE novelist Dionysios Skytobrachion puts her somewhere in Libya, where Herodotus had said the Berbers originated her myth, as part of their religion.

Medusa was beheaded by the hero Perseus, who thereafter used her head, which retained its ability to turn onlookers to stone, as a weapon until he gave it to the goddess Athena to place on her shield. In classical antiquity the image of the head of Medusa appeared in the evil-averting device known as the Gorgoneion.

The three Gorgon sisters, Medusa, Stheno, and Euryale were all children of the ancient marine deities Phorkys (or "Phorkys") and his sister Keto (or "Ceto"), chthonic monsters from an archaic world. Their genealogy is shared with other sisters, the Graeae, as in Aeschylus's Prometheus Bound, which places both trinities of sisters far off "on Kisthene's dreadful plain":

"Near them their sisters three, the Gorgons, winged
With snakes for hair— hatred of mortal man—"

While ancient Greek vase-painters and relief carvers imagined Medusa and her sisters as beings born of monstrous form, sculptors and vase-painters of the fifth century began to envisage her as being beautiful as well as terrifying. In an ode written in 490 BC Pindar already speaks of "fair-cheeked Medusa".

In a late version of the Medusa myth, related by the Roman poet Ovid (Metamorphoses 4.770), Medusa was originally a ravishingly beautiful maiden, "the jealous aspiration of many suitors," but because Poseidon had raped her in Athena's temple, the enraged Athena transformed Medusa's beautiful hair to serpents and made her face so terrible to behold that the mere sight of it would turn onlookers to stone. In Ovid's telling, Perseus describes Medusa's punishment Athena as just and well earned.

In most versions of the story, she was beheaded by the hero Perseus, who was sent to fetch her head by King Polydectes of Seriphus because Polydectes wanted to marry his mother. The gods were well aware of this, and Perseus received help. He received a mirrored shield from Athena, gold, winged sandals from Hermes, a sword from Hephaestus and Hades's helm of invisibility. Since Medusa was the only one of the three Gorgons who was mortal, Perseus was able to slay her while looking at the reflection from the mirrored shield he received from Athena. During that time, Medusa was pregnant by Poseidon. When Perseus beheaded her, Pegasus, a winged horse, and Chrysaor, a giant wielding a golden sword, sprang from her body.

Jane Ellen Harrison argues that "her potency only begins when her head is severed, and that potency resides in the head; she is in a word a mask with a body later appended... the basis of the Gorgoneion is a cultus object, a ritual mask misunderstood."

In the Odyssey xi, Homer does not specifically mention the Gorgon Medusa:

"Lest for my daring Persephone the dread,
From Hades should send up an awful monster's grisly head."

According to Ovid, in northwest Africa, Perseus flew past the Titan Atlas, who stood holding the sky aloft, and transformed him into stone when he tried to attack him. In a similar manner, the corals of the Red Sea were said to have been formed of Medusa's blood spilled onto seaweed when Perseus laid down the petrifying head beside the shore during his short stay in Ethiopia where he saved and wed his future wife, the lovely princess Andromeda. Furthermore, the poisonous vipers of the Sahara, in the Argonautica 4.1515, Ovid's Metamorphoses 4.770 and Lucan's Pharsalia 9.820, were said to have grown from spilt drops of her blood. The blood of Medusa also spawned the Amphisbaena (a horned dragon-like creature with a snake-headed tail).

Perseus then flew to Seriphos, where his mother was about to be forced into marriage with the king. King Polydectes was turned into stone by the gaze of Medusa's head. Then Perseus gave the Gorgon's head to Athena, who placed it on her shield, the Aegis.

Some classical references refer to three Gorgons; Harrison considered that the tripling of Medusa into a trio of sisters was a secondary feature in the myth:

"The triple form is not primitive, it is merely an instance of a general tendency... which makes of each woman goddess a trinity, which has given us the Horae, the Charites, the Semnai, and a host of other triple groups. It is immediately obvious that the Gorgons are not really three but one + two. The two unslain sisters are mere appendages due to custom; the real Gorgon is Medusa." 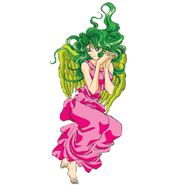