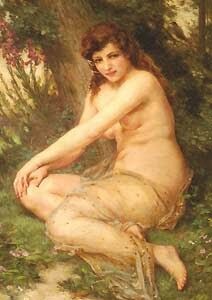 Minthe (also Menthe, Mintha or Mentha; Greek: Μίνθη or Μένθη) was a naiad associated with the Underworld River Kokytos aka Cocytus. Minthe lived in what is now Mount Minthe in Elis (southern Greece).

She was dazzled by Hades' golden chariot and was about to seduce him had not Queen Persephone intervened and metamorphosed Minthe into the pungently sweet-smelling mint, which some call hedyosmus. The –nth– element in menthe is characteristic of a class of words borrowed from a pre-Greek language: compare acanthus, labyrinth, Corinth, etc.

In ancient Greece, mint was used in funerary rites, together with rosemary and myrtle, and not simply to offset the smell of decay; mint was an element in the fermented barley drink called the kykeon that was an essential preparatory entheogen for participants in the Eleusinian mysteries, which offered hope in the afterlife for initiates.