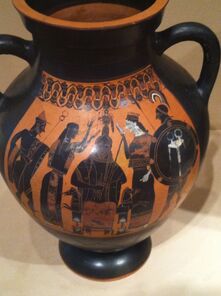 Mortals are the human beings that will one day die.

Mortals were created by Prometheus out of river clay. Prometheus was mad that his "babies" didn't know how to do anything. So one day he stole some fire from Olympus and gave it to some mortals.

The Greeks believed that there was a flame inside all of us that stayed alive until the day we die. They also thought that we breathed so the flame wouldn't start our whole body on fire.

Mortals could be killed two ways in the myths. The first way is that Hypnos and Thanatos came to you and Hypnos made you fall asleep and Thanatos peacefully touched you which killed you. The second way was with Ker, the goddess of violent death and accidental deaths. She came around to watch you die. She would watch accidents, murders, or anything violent.

A few mortals or demigods were given immortality for a good reason. Here they are.