Narcissus was a young man who was eventually cursed to fall in love with his reflection. He was the son of the river god Cephissus and nymph Liriope.

In one myth, Narcissus  was walking through the forest when he came upon Echo, who had been cursed to repeat the last thing people said.  He asked her the way out, and she kept repeating him. When he found out she loved him, he grew upset and immediately left her.  She prayed to Aphrodite, who caused him to fall in love with his reflection, and turned her into just an echo to ease the pain.

In another myth it was Nemesis who saw his cruelty to her, and caused him to fall in love with his reflection.

In both of those myths, seeing his reflection he fell in love, and, in one myth, turned into the flower narcissus, and in the other stared at himself for so long he forget to eat and drink, and died of thirst and hunger.

There is also another version of the myth where a young girl named Aminias wanted to marry him, and Narcissus turned him down and gave her a sword, and with it Aminias committed suicide, asking Nemesis to teach Narcissus a lesson. The Goddess caused Narcissus to fall in love with his reflection, and he killed himself because he couldn't have it.

Narcissus' story has been used in many books, films, and music. He was even portrayed in the Disney movie Hercules as a god with purple skin. He is also in Rick Riordan's books Heroes of Olympus: Mark of Athena. Many famous artists, including Salvador Dali have based their artworks on the myth. 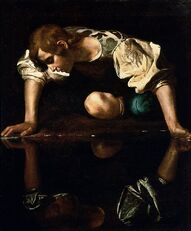 Add a photo to this gallery
Retrieved from "https://greekmythology.wikia.org/wiki/Narcissus?oldid=75330"
Community content is available under CC-BY-SA unless otherwise noted.