Nike (Gr: Νικη), not to be mistaken with the multinational shoe corporation Nike, was the goddess of victory and daughter of Pallas and Styx. While she accompanies Athena into battles, she is well known for driving Zeus' chariot for him during battle. Nike and her three other siblings, were the four Winged Enforcers of Zeus. She is the daughter of Styx and Pallas.

Nike is seen with wings in most statues and paintings, one of the most famous being the Winged Victory of Samothrace. Most other winged deities in the Greek pantheon had shed their wings by Classical times. Nike is the goddess of strength, speed, and victory. Nike was a very close acquaintance of Athena, and is thought to have stood in Athena's outstretched hand in the statue of Athena located in the Parthenon. Nike is one of the most commonly portrayed figures on Greek coins.

Statue of the Goddess Nike on the Titanic Engineers' Memorial, Southampton. 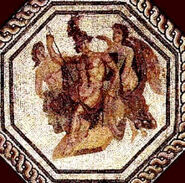 Ares represents Tuesday in a mosaic depicting the seven days of the week. He sits on a throne, armed with shield, helm and spear, and is attended by his son Phobos, and the winged goddess Nike.

Add a photo to this gallery
Retrieved from "https://greekmythology.wikia.org/wiki/Nike?oldid=78706"
Community content is available under CC-BY-SA unless otherwise noted.