Notos or Notus (Gr: Νοτος) was the god of the south wind and summer. He was a member of the Anemoi along with Boreas, Euros, and Zephyros. He is the son of Eos, the Titaness of dawn, and Astraios, the Titan of stars and planets.

Notos was thought to bring the storms of early autumn and late summer. He was the god who people feared as the crop destroyer. 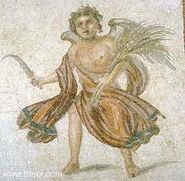 Add a photo to this gallery
Retrieved from "https://greekmythology.wikia.org/wiki/Notos_(Anemoi)?oldid=75282"
Community content is available under CC-BY-SA unless otherwise noted.