The Olympians are the twelve higher gods. They come from high means, usually from the current or last ruler. Each gets a throne on the highest peak of Mount Olympus.

After Zeus became king and ruler (he cast lots with his brothers to see what they would rule) Poseidon, Hera, Hestia, and Demeter obtained seats on Mount Olympus. Hades had become ruler of The Underworld, and decided to stay there instead of getting a seat. Zeus had chosen Hera as his wife and queen. Zeus and Hera had two children, Ares and Hephaestus, whom also got thrones. Aphrodite, who was born of unknown means, was given a throne due to her immense beauty. Zeus and the titaness Leto had twins, Apollo and Artemis, they were given thrones on Olympus as well. Athena was the child of Zeus and Metis, she was given a throne because of her wisdom. Zeus and Maia had a child whom was very crafty and talented, Hermes. He became messenger of the gods and was thus given a throne. Zeus had a demigod child, Dionysus, whom invented wine. Zeus was ecstatic about this, so he made him an Olympian. Then in some accounts, Hestia tended to the sacred hearth in the halls of Olympus and gave up her place for Dionysus.

Other gods worthy of Olympians:

All Olympians possess standard magic and supernatural abilities. All gods can change their shape, size, form and appearance. They can grant or revoke abilities. All Olympians also have direct or indirect control over weather, unlike the chthonic god, Hades. Many gods, mainly Zeus, Poseidon, Hades, Apollo, Athena, Hermes etc. can look into the future at varying degrees.

Zeus, Poseidon and Hades collectively share powers over the earth. 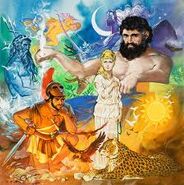 Add a photo to this gallery
Retrieved from "https://greekmythology.wikia.org/wiki/Olympians?oldid=79240"
Community content is available under CC-BY-SA unless otherwise noted.