Orpheus (Ὀρφεύς) was the demigod child of Apollo and Kalliope (a Muse). He was a very talented lyre player. He was one of the Argonauts that sailed on the Argo with Jason.

He later fell in love with a nymph named Eurydike and married her. Unfortunately, before their wedding, Orpheus's brother, Aristaeus loved Eurydike and wanted to marry her. But then she said no. Soon he will get her True enough since Eurydike was bitten by a viper that was him after the wedding. Orpheus then journeyed down to the Underworld with his lyre. He charmed Kharon and Kerberus. He moved Hades and Persephone with his lyre. Hades allowed Eurydike to follow him back on the condition that Orpheus must not look back until he and Eurydike have reached the world of the living. During the journey back Orpheus didn't look back, but when they were close and he barely noticed her presence, he turned and looked back. Eurydike was consumed by the shadows and went back to the Underworld.

Time as an Argonaut

The Argonautica (Greek: Ἀργοναυτικά) is a Greek epic poem written by Apollonius Rhodius in the 3rd century BC. Orpheus took part in this adventure and used his skills to aid his companions. Khiron told Jason that without the aid of Orpheus, the Argonauts would never be able to pass the Sirens—the same Sirens encountered by Odysseus in Homer's epic poem The Odyssey. The Sirens lived on three small, rocky islands called Sirenum scopuli and sang beautiful songs that enticed sailors to come to them, which resulted in the crashing of their ships into the islands. When Orpheus heard their voices, he drew his lyre and played music that was louder and more beautiful, drowning out the Sirens' bewitching songs. According to 3rd century BC Hellenistic elegiac poet Phanokles, Orpheus loved the young Argonaut Kalais, "the son of Boreas, with all his heart, and went often in shaded groves still singing of his desire, nor was his heart at rest. But always, sleepless cares wasted his spirits as he looked at fresh Kalais."[

While Orpheus was journeying through the land, playing his sad melody, a band of Maenads, frenzied female followers of Dionysus, saw him. They thought he was a wild animal and tore him limb from limb. People later found his body and buried it. Apollo took his lyre and placed it in the night sky as the constellation, Lyra.

Another account relates that he was struck with lightning by Zeus for having lied about the stories mentioning Zeus violating his daughter Persephone. He was also temporarily denied access into the Underworld to ensure he was punished for his lies and hubris towards Hades and Persephone.

When Orpheus was killed by the Maenads, his head was thrown into the River Hebrus and it never stopped singing. Orpheus's head washed up on an island called Lesbos and Apollo granted the head with the gift of Prophecy. Apollo would later remove the gift of prophecy away from the head and the head would be buried. 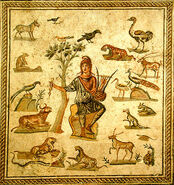 Roman mosaic depicting Orpheus, wearing a Phrygian cap and surrounded by the beasts charmed by the music of his lyre 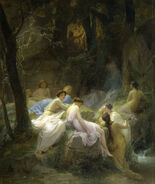 Nymphs Listening to the Songs of Orpheus by Charles François Jalabert

Nymphs Finding the Head of Orpheus by John William Waterhouse

Orpheus & Eurydike
Add a photo to this gallery

Retrieved from "https://greekmythology.wikia.org/wiki/Orpheus?oldid=78985"
Community content is available under CC-BY-SA unless otherwise noted.