Patroklus was the lover and best friend of Akhilles. He was the son of Menoitios, king of Opus, but was exiled for accidentally killing a boy over a game of dice. He journeyed across the land and finally came to the House of Peleus. Peleus accepted him and named him as Akhilles' companion. Despite this, it is thought that they were in a romantic relationship, as common by Greek standards of the time.

As the only person Akhilles was tender to, Patroclus' death was the main motivation for Akhilles to return to war.

Patroclus' death was caused by Hektor in the Trojan War. Patroclus had dressed in Ahilles' armor and went into battle. Hector thought that Patroclus was indeed Akhilles, but then after he had slain Patroclus, that he realized that it wasn't Akhilles. 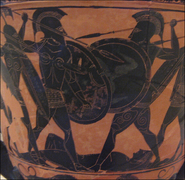 Add a photo to this gallery
Retrieved from "https://greekmythology.wikia.org/wiki/Patroklos?oldid=75755"
Community content is available under CC-BY-SA unless otherwise noted.