The Peacock is one of the birds sacred to Hera. The feathers are a tribute to the hundred eyed Giant Argus who once guarded Io when she was transformed into a Heifer.

Eyes of the Peacock

Zeus was married to Hera, however, he fell in love with Io.  Zeus had turned Io into a beautiful white bovine to hide her true identity from Hera.  Zeus feared the intensity of Hera's jealousy and tried to hide himself and the heifer he loved by wrapping the earth in a dense cloud, thick enough to create constant night.  With daylight suddenly missing from the earth, Hera knew that her obtuse husband was up to something.  Searching the heavens to no avail, she descended to earth, ordering the cloud away.  She found Zeus beside the white heifer, claiming he just discovered the newly born cow.  Hera knew that Zeus was lying to her, but played his bluff and asked for the cow as a gift. Zeus felt terrible doing it, but he knew that Hera would suspect something if he didn't concede. He reluctantly turned Io over to his wife, and Hera knew exactly what to do to keep Io away from him.

Hera recruited Argus to guard the heifer. He had a hundred eyes and could sleep  while always leaving some eyes open, making him the perfect watchman.  Zeus writhed as misery engulfed his love.  Io had been turned into a cow, taken from her home, and now trapped under Hera's orders.  Unable to withstand Io's anguish, Zeus called on Hermes, the messenger of the gods, and informed him to find a way to kill Argus and set Io free.  Hermes was extremely clever, shedding all his godly paraphernalia and went to Argus in the guise of a country fellow.  Hermes decide to make a pipe of reeds his luring weapon of choice and played music close enough to draw Argus' attention.  Argus found the music most pleasing and invited Hermes to sit beside him to play music for him.

The music however did not cause repose as Hermes hoped.  Soon, Hermes stopped playing and began to talk and talk monotonously.  This was nowhere near as enjoyable to Argus and he soon found himself bored as Hermes droned on and on with his mundane stories. The tale of Pan and Syrinx would finally lull Argus to sleep.  Once the hundredth eye had shut, Hermes struck, killing Argus in his slumber. Io was set free, until Hera would turn on her again, plaguing her with gad-flies that stung her into madness. In tribute to her trusted watchman, Hera took the eyes of Argus and set them to the tail of her favorite bird, the peacock.

The Peacock is so important to Hera that a pair of them are the animal chosen (by Hera) to pull Hera's Chariot. 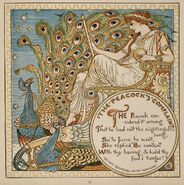 Hera's Chariot drawn by a peacock 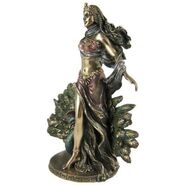 Statue of Hera with a peacock

Hera upon her throne with a peacock by her side 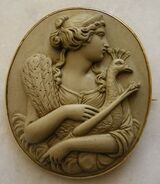 Hera with a peacock

Add a photo to this gallery
Retrieved from "https://greekmythology.wikia.org/wiki/Peacock?oldid=73872"
Community content is available under CC-BY-SA unless otherwise noted.