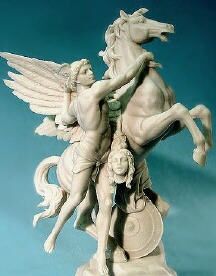 Pegasos (Gr: Πηγασος) is another spelling for the legendary Pegasus.

The Pegasos was usually depicted as a snow-white winged horse. However, in some accounts it was said to be black as night.

Pegasos is the son of Poseidon and Medusa . Medusa was raped by Poseidon in Athena's temple, and was consequently turned in to a Gorgon by Athena. As a result of the rape, Medusa became pregnant. Medusa was still carrying her fetus during her battle with Perseus. Thus, when the Greek hero decapitated Medusa, Pegasos, along with a giant, sword-wielding, golden warrior named Chrysaor sprang out from her body.

In another myth, it aided the hero Bellerophon in his quest to kill the Chimera.

When Bellerephon later attempted to fly Pegasos to Mount Olympus, he was knocked off of the winged horse by Zeus. Pegasos, however, continued on and made it to Mount Olympus, where he spent his days carrying lighting bolts for Zeus. 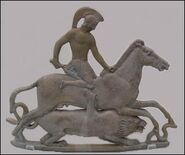 Bellerophontes astride Pegasos fighting the Chimaira 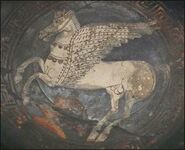 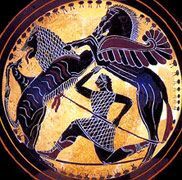 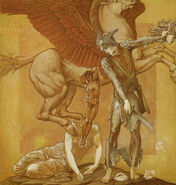 Perseus killing Medusa from whom Pegasos and Khrysaor sprung from