Greek Mythology Wiki
Register
Don't have an account?
Sign In
Advertisement
in: Gigantes, Children of Tartarus, Males,
and 2 more

In the Gigantomakhia, Poseidon chased Polybotes across the seas, then, when they fought, Poseidon tore of part of an island and threw it at Polybotes, thus not killing him, because a Gigante can only be killed with a god and a human together, but trapping him under the island. 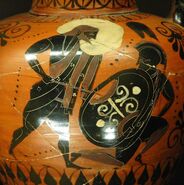 Attic black-figure neck amphora by the Swing Painter, c. 540 BC. showing Poseidon fighting the Giant Polybotes during the Gigatomachy the island Nisyros was formed when Poseidon cut a part of Kos and threw it on the giant Polyvotis (Polybotes) to stop him from escaping. 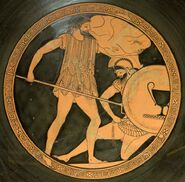