Psykhe (Gr: Ψυχη) is an alternative spelling for Psyche the goddess of the soul and the wife of Eros.

Psyche was born human, to an unnamed Greek King and Queen,the youngest and most attractive of their three beautiful daughters, so intoxicating Psykhe's appearance that she became worshipped in the place of Aphrodite as the New Goddess of Love. An angry and jealous Aphrodite whose temples became bare due to this, commanded her son, Eros to make Psykhe fall in love with worst man on Earth. Eros set off to see the Princess at night, whilst asleep and acknowledged her looks, never had he seen a human woman, Nymph or Even Goddess beautiful as her. Doing as his mother told him, he aimed an arrow at Psykhe, but it bounced right off of her and shot into him instead, subject to the magic arrow, Eros fell in love with Psyche before exiting her bedroom.

Psykhe parents' are concerned about their daughter's future, as nobody asked for her hand in marriage, considering her as too special for them, whilst their first two daughters by now had married into wealthy and powerful families. Psyche and her parents go to The Oracle at Delphi, famous for giving prophecies, to consult about her future After much praying, the three are told that Psyche is destined to marry a monster. She was commanded to be left on the edge of a mountain, to await her fate. Psyche's parents are inconsolable that their daughter has to marry such a terrible being. The bride was then lifted away by the West Wind, Zephyrus, to the household of the groom. Psykhe walked to find a beautiful palace, with gorgeous architecture and delicious food.

During the dark night, Eros, comes and tell his bride not to look at his face, as she would shocked. The two enjoy several romantic nights together, and make love to each other, impregnating Psyche. One day, Eros agrees to let Psyche's sisters to come and visit her in the palace, due to her loneliness during the daytime, so the sisters go to meet her, surprised at her new home. When they enquire about her husband, Psyche, tells that she never has seen his face as he comes to visit her during the darkness. The sisters shocked, advise Psykhe, to prepare a candle and a knife, to see her husband's true identity and if he is a monster,to kill him, reasoning that he could be preparing to devour her. Later on Eros spends time with Psyche, and the couple then go to bed. Whilst Eros is sleeping, Psyche lights up a candle to see the face of her husband, but she accidentally pricks herself on one of his arrows, amazed to see who he is, some melted wax drips from the candle and spills onto Eros' shoulder and he awakes in pain. Shocked that his wife has betrayed him. He runs away and Psyche chases after him, but he flies away, leaving her on a cliff. There she is encountered by Pan, after acknowledging his divinity, she searches for her husband. Shortly, Psykhe meets one of her sisters and confides in her, her second sister then comes, jealous of Psykhe's husband, the two climb the rocky crag and offer themselves as brides of Eros, jumping off the mountain, hoping to be carried by Zephyr, they instead fall to brutal death.

Psyche journeys to Mount Olympus, to see if there is a way she can reunite with Eros and meets a vindictive Aphrodite, whose servants whip her, for hurting her son. She also shames Psyche for getting pregnant in a sham marriage. Aphrodite tells Psyche that she has to complete four tasks in order to reunite with Eros, fail one of them and she could never see him again. For the first task, Psyche was sent to Aphrodite's storehouse to order a huge pile of grains. Psyche was overwhelmed by the task and sadly got on to work, lucky for her, Eros told a group of ants to help her sort out the individual grains, Psyche thanked the ants, before Aphrodite returned to Psyche, shocked and angered by what she saw. She gave Psyche a second task to walk across a river and fetch golden wool from violent sheep who graze on the other side. Psyche decides to commit suicide by drowning on the way there, but is instead saved by instructions from a divinely inspired reed and gathers the wool from the Briers. 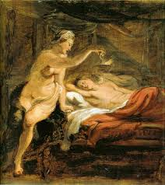 Psykhe is drug by the hair to Aphrodite

Sculpture of Psykhe (with her wings) 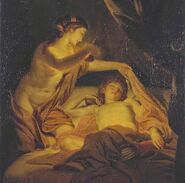 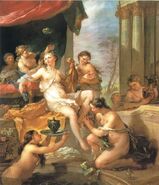 Psykhe being worshipped as Aphrodite

Psyche discovers Eros
Add a photo to this gallery
Retrieved from "https://greekmythology.wikia.org/wiki/Psykhe?oldid=78054"
Community content is available under CC-BY-SA unless otherwise noted.