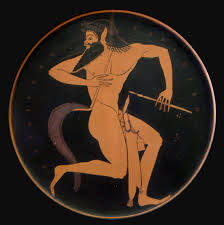 Satyrs are creatures with the upper half of a man but the lower half and horns of a goat.

Satyrs are often depicted as drunken, lustful creatures who are often chasing after nymphs because of their beauty. They are sometimes associated with the gods Pan and Dionysus. One of the most famous satyrs was Seilênos, who was a follower of Dionysus.

According to legend, a king by the name of Midas found the satyr, Silenus asleep in his garden. Knowing that Silenus was a follower of Dionysus, he invited Silenus into his castle and feasted with him until Dionysus came back for him. Seeing how well Silenus had been treated, Dionysus offered to grant King Midas a wish. As Midas was very greedy, he wished that everything he touched would turn to gold. Dionysus warned him that the greediest wishes would bring the greatest sorrow but Midas insisted and Dionysus had no choice but to grant it. Soon, Midas realised that the golden touch had become a curse. Whatever he drank or ate immediately turned to gold. Even his daughter,who bent down to hug him,turned to gold. Midas went back to Dionysus and apologised for his greedy behaviour. Dionysus took pity on him and taught him that the spell could be reversed via running water.

Retrieved from "https://greekmythology.wikia.org/wiki/Satyr?oldid=67115"
Community content is available under CC-BY-SA unless otherwise noted.