Scylla (Skylla) was a beast who would grab sailors off of their ship and take them up to her cave to eat them.

Various Greek myths account for Skylla's origins and fate. According to some, she was one of the children of Phorkys and Keto. Other sources, including Stesichorus, cite her parents as Triton and Lamia. According to John Tzetzes and Servius' commentary on the Aeneid, Skylla was a beautiful naiad who was claimed by Poseidon, but the jealous Amphitrite turned her into a monster by poisoning the water of the spring where Skylla would bathe.

There is a similar story found in Hyginus (which is more likely), according to whom Skylla was the daughter of the river god Krataeis and was loved by Glaukus, but Glaukus himself was also loved by the sorceress Kirke. While Skylla was bathing in the sea, the jealous Kirce poured a potion into the sea water which caused Skylla to transform into a monster with four eyes and six long necks equipped with grisly heads, each of which contained three rows of sharp teeth. Her body consisted of 12 tentacle-like legs and a cat's tail, while four to six dog-heads ringed her waist. In this form, she attacked the ships of passing sailors, seizing one of the crew with each of her heads.

In a late Greek myth, recorded in Eustathius' commentary on Homer and John Tzetzes, Herakles encountered Scylla during a journey to Sicily and slew her. Her father, the sea-god Phorcys, then applied flaming torches to her body and restored her to life. 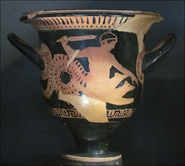 Add a photo to this gallery
Retrieved from "https://greekmythology.wikia.org/wiki/Scylla?oldid=77169"
Community content is available under CC-BY-SA unless otherwise noted.